I have a new toy; it's my Retaggr card. It took me about 15 minutes to set up (10 if Blogger had decided to play ball) and I'm really pleased with the way it turned out:

It's embeddable (click on the icons and they whizz you to whichever of my networks you've selected) and it's given me a profile page to tell people a bit about myself - should they care - and to embed widgets and other bits and pieces on. I've added nearly all my networks, social and professional, and then ordered them in terms of use.

Handily, it's fairly easy to customise, as I found when Bambuser wasn't among the options listed, and it also picks up widgets I've made on various sites and gives me the option to include them if I wish.

I've added it as a permanent badge on my blog, but I can embed it on any of my sites if I want. Oh, and you can pay for an upgraded service too, but I'm quite happy with this one.
Of course, I could have mashed my Friendfeed rss into a widget and come up with something a bit like this, but it wouldn't have looked as nice I suspect. And, thanks to Retaggr, I haven't had to.
By Unknown Posted Wednesday, January 28, 2009 No comments:

I've found my Twitter followers are growing quite rapidly recently, probably as connectors such as Mr Tweet and Twellow become more widely used.
I follow quite of lot of them back (unless they only update via an automatic feed telling Twitter they've blogged) as I like having a widening conversation circle - but there are a couple of things in the way of 'Twetiquette' that I find irritating:

1. Auto DMs that say something along the lines of: "thanks for the follow. Find out more about (insert pointless marketing opportunity here) by visiting my website"... I love the excellent "Click on My Junk" post by Amber Naslund, which sums this up perfectly

2. The other irritation is this:

So this person is already following me - but how do I find out about my new follower if I can't see their Twitter stream? Yes, I can click on their profile's website link but often that won't tell me if we share friends, if they converse or simply broadcast, or whether they are following me because we live in the same area or work in the same field.

In fact, it irritates me so much that I ended up (once more) turning to Twitter for the answer. 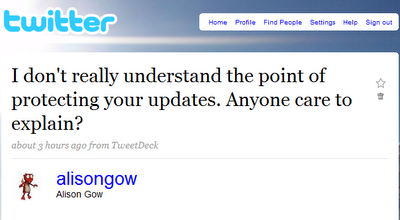 I got some interesting responses.

In the "I don't do it but understand why some might" camp:
@Torgwen Yes to have small group of friends/for work etc. whereas now any unknown nosey b***r like me can read what you write!
@davidbartlett1 maybe if you say "I'm going to America for three weeks" you fear someone might break into your house?

In the "They're missing the point" camp:
@editorialgirl I don't get it either. Some of my followers have protected updates - so I have no idea if they're worth following back or not
@foodiesarah & what exactly are they hiding? even more ironic when bio says "social networker". umm, that'll b on a one-way social network ?

And there's the "life is too short to bother with lurkers" camp:
@louisebolotin I block unknown followers who have protected their updates!

Confession: When I joined Twitter I protected my updates for about 2 weeks; I stopped because it felt wrong and ... precious. Nothing I tweeted was so interesting that it merited forcing someone to ask permission to follow me. Why did I protect them in the first place? Just to see if it worked. Well, it did. I got no new followers for that fortnight, and I switched it off pretty smartly.

Personally, if you protect your updates, I feel as though you've already placed limits on our potential conversations and future networks.
It would be interesting to know if many of those who padlock their updates are newsbies to social networks. Do you protect yours? If so, why? Is it because you are fed up with spammers? Block them if it bothers you that much.
Social media is about opening conversations, sharing, linking, building networks; if you put up barriers and police who can follow you too rigidly, you are going to miss out on a lot.
By Unknown Posted Sunday, January 18, 2009 13 comments:

Why are users leaving Plurk?

I signed up to Plurk, the quirky microblog that allows threaded conversations, shared photos, links and videos, more or less at its launch and I've been a staunch supporter ever since, despite the fact that it's a rather odd looking beast.

But lately Plurk has gone into a decline, and now it seems as though it's really starting to fail in earnest. Last week a Plurk friend, Rob, became the latest user I've seen to question its problems.
On his blog he asked the question Plurk No Growing. Why? on his blog and polled whether it was Plurk's 'karma' gimmick that was holding it back (66% said it was a turn-off).
Others complain "Plurk is too time consuming w/ the web interface", "Lack of promotion", and "as nice as threaded conversations are in theory, in practice, they don’t really work in a Plurk/Twitter-like service".

I know some people get seriously annoyed when their kama falls(and consequently their emoticons are reduced) when they fail to use Plurk for a day or so but I'm not sure it should shoulder the full blame for what seems to be this site's slow death.

I think the reason more and more people are posting messages like this... 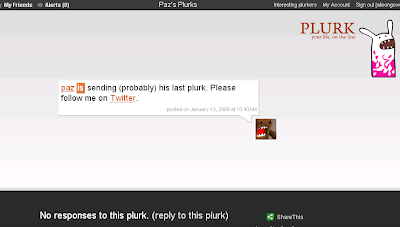 ... is the very thing that everyone got excited about in the first place... the ability to hold threaded conversations.

I have a small core of Plurk mates and a wider circle of friends whose conversations I dip in and out of.
I steer clear of threads that I know are just going to get nasty (anything regarding Israel at the moment) as what starts out as a reasoned debate always - and I mean always - descends into open hostility. Likewise, people who once got perhaps 135 responses for saying 'morning Plurk' and now get perhaps 10 (probably because there are so many users saying 'morning' it's frankly boring to respond to everyone) and then post disgrunted messages about how the service has deteriorated.

Finally, Plurk has been incredibly buggy lately; messages post twice or not at all, the timeline works sporadically and is still not searchable, and it all feels a bit clunky.
I'm still using it right now but it feels like it's withering on the vine. For an online social network that had such promise, it now feels like it's in a terminal decline.
By Unknown Posted Tuesday, January 13, 2009 4 comments:

Sometimes it's easier to let others to make the choice.
When it came to deciding whether my little devil avatar was actually something I was hiding behind, rather than being my online representative, I turned to the people.
The Ask500people specifically; the poll was a simple Yes/No question: Do you prefer it if someone uses their own photo as their online avatar?
And the result was a surprise.

There were 424 votes from around the world and supporters of the 'photo' option got off to a flying start. I was a little surprised, I have to say, but once the poll hit the front page the 'Nos' really got into gear.
The fairly overwhelming conclusion was 256 votes for No and 168 votes for Yes - 60% to 40% if you prefer.

So I decided to keep my red devil because of the poll? Yes... and no. What swung it (and would have done even if the vote had gone the other way I suspect) was this Markmedia's rather sensible advice: "He makes it so much easier to pick you out from the drab masses. Feel the same about Jo's cat".

So perhaps the conclusion I should draw from my adventures is that lively conversation, debate and opinion are more important than what your online personification is. I enjoyed setting up the poll, promoting it and talking to people online about it far more than I would have done if I'd just made a decision and gone with it.
My little devil must be laughing his head off at all this.
By Unknown Posted Wednesday, January 07, 2009 4 comments:

How important is your online avatar?

He and I formed an allience on the day I joined Twitter, courtesy of a Markmedia lesson in social media at Uclan, and decided I wanted a cute avatar instead of the default o_O brown square Twitter gives you.

Now he's my avatar on all my networks, apart from LinkedIn, which has an old photo of me, as I figured a red demon might not be the ideal professional representation. On Utterli he flutters around, but on most of the sites he's a static beastie. And he's definitely a boy as far as I'm concerned, which is weird considering he represents me.

I'm massively attached to him and by using the same avatar on all sites, it's easy for people to know it's me. Although since I'm alisongow just about everywhere, I guess it's not really a Mastermind situation.

But recently, I've started to feel a little uncomfortable having a cartoon devil as an avatar, because it doesn't seem particularly, well, transparent. Am I hiding behind an image? Would it be more open and honest for me to use a photo of me than upload my devil?
I don't know if anyone else even cares, but I'm starting to feel a little hypocritical about not showing my face online.

I also notice increasing number of people on Twitter are changing their avatars to real photos of themselves, and I wonder why that is.
So I turned to Ask500people just to see what the consensus was.
If you have the time to vote, please do. My little devil may depend on you...
By Unknown Posted Saturday, January 03, 2009 5 comments: