Florida's Palm Beach Post is giddy with happiness at the moment, because a judge has ruled journalists can report court cases in real-time.
In a breakthrough which, I suspect, no other media source in Florida will acknowledge the Post's role in achieving, a judge overturned a rule that stated journalists could not bring devices such as mobile phones into a courthouse.
The order will not allow reporters to blog or text from inside the courtroom - instead they will have to nip in and out of the hearing to Tweet, liveblog or text their updates on the proceedings.
The Post reports:


In an expansion of public access to federal courts, a judge will allow news reporters to post live updates to the web inside federal courthouses from Key West to Fort Pierce.
U.S. District Judge Federico Moreno, chief judge for the Southern District of Florida, issued the administrative order Monday in response to a request from The Palm Beach Post.


So, good for the Post - it's always heartening to see campaigning newspapers pushing against established laws that hinder public knowledge.
Now my question is this: Should UK newspapers be lobbying for the same change in the law? And I'd have to say that this ruling, as it stands, wouldn't work in most of our courts.

I covered magistrates and crown courts for around 10 years; I got to know judges, clerks, ushers (tip: be nice to ushers - they know everything) defendants and the occasional barrister, one of whom once told me she hoped I was unable to have children after I successfully argued against a Section 39 order. Classy.

Once the court is in session, it is considered inappropriate to enter and leave the courtroom unless it is absolutely vital. Vacate the press bench more than twice in an hour and you can well have the full weight of magisterial might (aka the bloke with the double-barrelled name who also sits on the county council) glaring down from the town hall bench.
In Crown court, should the judge deign to notice, a reporter might well end up having to tell a hushed courtroom exactly what was so pressing that they had to interrupt the proceedings again and risk committing Contempt.

And I can understand why. After all, these are the halls of justice and the defendant deserves his or her case to be heard by all, not muted by sounds of shuffleshuffle "sorry" shuffle "'scuse me" shuffle and then scrrrrrrrrrrrrrrrrrrrech as the courtroom door groans open to allow the exit of a hapless hack...

But equally, the laws governing court reporting in the UK needs a pretty serious overhaul. The days of sitting laboriously through a case then heading back to the office have given way to press rooms in courts where reporters can file remotely back to HQ.
During the recent Rhys Jones murder trial the Liverpool Echo liveblogged the proceedings, which lasted nearly two months.
It was a service readers valued and stayed with for the duration, but the Echo was only able to do this because the court press bench was so oversubscribed that a special annexe had to be set up to house most of the pack. Information was relayed via video link, and one reporter liveblogged from the annexe, while another sat inside the court to cover proceedings.

Wouldn't it make sense to have a reporter sat at a press bench with a laptop, liveblogging proceedings, or simply inputting copy direct to the newsdesk queue? Laptops are so unobtrusive it could easily be achieved - and someone working quietly on the press bench (sans webcam of course!) is far less irritating than, for example, a bored solicitor idling away time until his case starts by wrestling with a broadsheet.

Mobile phones being banned from a courtroom I understand - too much potential for noise, without even taking the camera option into consideration - but in an age of networked journalism, shouldn't we expect the court press bench be networked too?
It's hardly as though a juror would nip over at recess and ask if a quick Google search on the background could be done. (Although there are few things I would put past juries - I've never known one not break a news editor's heart, whether it be over the decision or the timing of it.)

Is it really too great a stretch for a reporter to be allowed to update a public hearing in a public courtroom? Is it really an affront to justice if proceedings are covered in real time, without the journalist having to nip out an ring copy back?
Get the courtroom press bench online and networked, and you suddenly really do start to have open justice. (And that, of course, opens up another question: Should laptops be allowed in the public gallery?)

No doubt there are a whole raft of security reasons why this can't happen but even if the argument is naive I still think the time has come for a change in the procedures to allow real-time court reporting. And not the 'scurry out-scurry in' approach Florida has allowed but authentic, honest, up-to-the-minute coverage of court cases that are happening around the country right now. If people can see justice in progress, may be they will have more confidence in the Judiciary.
By Unknown Posted Monday, March 30, 2009 No comments:

I'm back in the UK and blogging after two weeks of fresh air and exercise on the snowy slopes of Sun Peaks in British Columbia.

And while the dearth of internet options up a mountain was a bit of a setback it did mean I got to read lots of so-called dead tree media, including the Vancouver edition of Globe and Mail, Canada's largest-circulation newspaper and acknowledged paper of record.

And among the articles it ran was an exellent piece entitled Future of Media: Is democracy written in disappearing ink? which I found fascinating. I recycled the paper, figuring I could search for it online once back home and save it to Delicious.
"A plan!" I thought... and off I skied.

Fast-forward one tedious long-haul flight and I finally got reunited with my lovely laptop and ability to access teh interwebz. So I went to the Mail's website to look for 'my' article, found it on the reportonbusiness.com section and then had a surprise (click to enlarge the image)... 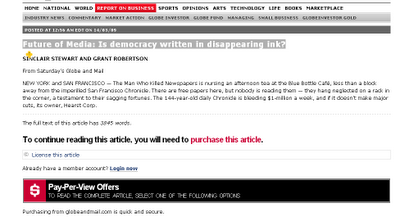 So although I'd bought the newspaper, my failure to cart it halfway across the world meant an article I had already paid to read in print was now inaccessible to me. I couldn't review it, couldn't link to it from this blog, couldn't share the link on Twitter... it was off-limits unless I paid again (which I could have but it cost more than $5, including tax, for 30-days access).

To be fair, most of the Mail's website is free to access (subscription on specific content was introduced in 2004) and I could have roamed around reading much of its content at will. And since I believe some sort of payment model will be introduced on newspaper websites at some point in the future surely should I really find this irritating?

Maybe not, but my setback in sharing the article got me asking myself a question: Could charging to read online content mean we gain on the swings while we lose on the roundabouts?
Of course, journalism and the world of finance have never been easy bedfellows - reporters regard those who pay the newsroom gas bill with a degree of suspicion - and, frankly, the whole paid content debate has been dealt with far more intelligently by other people than me.

But my two penn'orth is simply this: had I been able to access that story, I'm willing to bet I would have driven traffic to it though linking and sharing the url, and I'm just one random reader. It might have generated Twitter conversation, maybe been saved a few times on social bookmarkink or linked to by other bloggers - it might have garnered far more readers as a result of being shared by a non-subscriber.
In short, it had more possibilities and potential. And, finally, I wonder if the traffic potentially generated by a non-payment system might be more attractive to advertisers than the niche visitors they would be able to claim now?
By Unknown Posted Tuesday, March 24, 2009 3 comments: